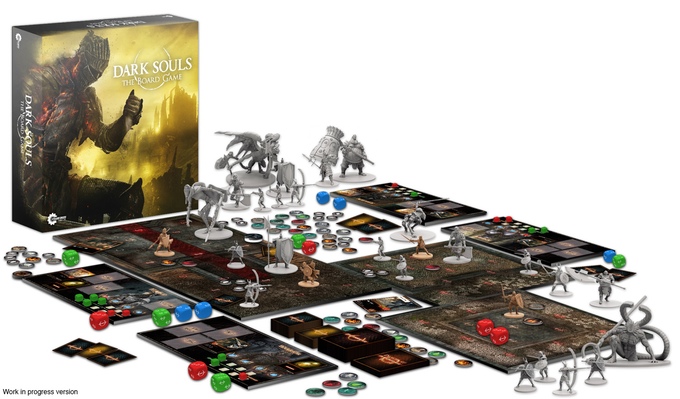 Translating The Action of Dark Souls to a Kickstarter Board Game

As you may already know, I’m a huge Dark Souls fan and also big into board games. As such, a Dark Souls board game is definitely  something that I’m really psyched about. I’m 35 hours deep into Dark Souls 3 right now and loving it (just beat the Ancient Wyvern and working on the Nameless King), but I still have mixed feelings about it being the last of the series. I’m definitely going to replay it a few times, as I have with Dark Souls and plan to with Dark Souls 2, but it’s good to know the universe will expand beyond them. I’m really excited about bringing the universe to another format I’m into, but I’m a little shaky well it will translate the experience. Regardless of how much like Dark Souls it feels, the mechanics look solid.

The Dark Souls games are pulse pounding adventures through highly detailed worlds rich in lore and defined by their epic monster battles. You learn and develop as you play, and sometimes end up beating your head against bosses for hours until you finally emerge from the fog wall victorious. My left thumb actively hurts from playing so much more with my gamepad than I’m used to, and it’s satisfying as many hard earned accomplishments are. The board game is focused on both the daunting exploration and those epic monster encounters, and it’s going to be interesting to see how they capture that experience in miniatures and cardboard.

From the mock ups of the miniatures posted on the campaign site, the models look amazing. The game board looks rather bland, but even if it wasn’t, the figures would be stealing the show. That in itself is awesome and will sell some copies of the game to the inevitable overlap between Dark Souls fans and miniature fans and gamers. It’s a good start to show off the game when the mechanics are much more obscure.

Given that the game is being labeled as a “deeply immersive combat exploration” experience, there are several obvious mechanics from the original games to include. Some of these are discussed in the pitch video. While in combat, you must balance your damage with your stamina in order to not exhaust youself and leave yourself open to attack. There will also be leveling in order to strengthen characters as they delve deeper into the deadly environment. In order to level up, just like in the games, you’ll need accumulated souls and access to a bonfire. The use of a bonfire to level up does have consequences though, and as mirrored in the game, using one will bring back all of the monsters that were previously slain. This sounds great if they can pull off the tense atmosphere the game offers.

Along with the mechanics of the world you’re exploring, the boss fights should be a huge focus of this game. During boss fights, you’ll lean the movement patterns and techniques of the enemy and use that information to find openings. You’ll have to balance risk and reward as you exhaust stamina in order to attack while not tiring and leaving yourself open to attacks. In theory , this all sounds great and like another awesome way to experience the fun of Dark Souls, this time in local co-op with some friends!

Below is a quick gameplay video from Steam Forged of an encounter with a boss, the Dancer of the Boreal Valley. The video only shows how players will interact with  the single boss. This is likely similar to how you’ll face minor enemies, just on a different scale. It will be interesting to see how the whole picture comes together though, when you bring together minions, exploration, and manipulating bonfires along with the set boss encounters.

I’m excited for this, and not just because I’m crazy hyped up on Dark Souls 3 right now. The big reason I’m excited is, oddly enough, because of the Tomb Raider and Hitman Games. Not the big budget releases that we recently saw though, I’m referring to the mobile versions in Square Enix’s Go series of games. Hitman Go and Lara Croft Go both boiled down some action packed games into turn-based experiences that were basically digital board games. I’m hoping that Steam Forged Games can pull of a similar feat with this physical board game release, and bring to Souls series to a whole new kind of gamer.