As craft beer continues to explode passed pre-prohibition levels, which we expanded beyond in 2015, there is growing outside interest in the business of craft beer. This attention isn’t coming from just the usual offenders of macro-breweries, private equity firms are also investing based on the prominence of emerging breweries.

This is without a doubt a double edged sword. Additional investments can provide crucial help to breweries struggling with rapid growth as they get over the hump and come closer to reaching their potential. Unfortunately, it can also dilute the breweries focus on the craft of beer and redirect it to investor returns. Similarly with macro-breweries, a purchase can greatly help a craft brewery extend their production and distribution, but can also stifle innovation in favor of increased revenue as macro brewery products’ sale stagnate. 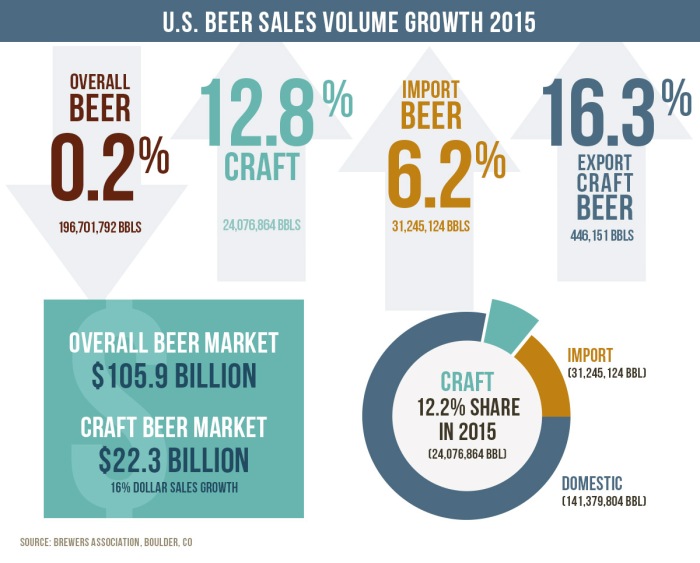 The Brewers Association reports that even though overall beer sales are down in the U.S., craft beer sales grew to almost 13% of all sales in 2015. The big breweries out there are still the biggest game in town by far, but they’re seeing less of dominance year over year and want to appeal to the growing craft beer drinking demographic by diversifying their offerings.

Macro-breweries have been paying close attention to developments in craft beer for years and have snatched up quite a few to vary their revenue streams. As stated above, this could be seen as incredible aid for a a brewery facing immense growth. They could ramp up their production far ahead of schedule thanks to the funding, or even have some of their products brewed at one of the macro breweries state of the art facilities to ease their burden. But they might also have to deal with your new majority owner airing this on the world’s biggest stage for commercials.

Outside Investor Interest Could Hurt the Craft of Beer

As the craft beer industry becomes more prominent, it’s always tempting when an offer comes across the table. That offer could change a person’s life in more ways than one though. It comes up all the time with people working at growing craft breweries, the company’s focus feels as though it changes from the beer to the money. That can alienate the crowd a brewery most appealed to previously, but it could be necessary to stay in operation. Brewing is a business after all, but it’s one where the focus on quality beer creates a byproduct of revenue rather than the other way around. The purchase of Elysian and Dick Canwell’s retirement following the deal sums this situation up perfectly:

“In the past few months AB has treated me with consideration and seriousness, and they’ve presented me some pretty exciting future possibilities, should I be able to see my way clear to working for them. But I can’t. I am a craft brewer, past, present and future, no matter what I end up doing.”

Cantwell had one third ownership, was outvoted, and had the brewery he helped found swept away from him. “My concerns were never even considered as a factor of whether we should or shouldn’t. From the start it was me against everyone else,” he said in an interview following the deal. Greg Koch, the co-founder of renowned Stone Brewing Co. is looking to shake up the trend and give breweries struggling with their own growth a new option.

Koch has co-founded True Craft, a company handling $100 million in funding, with more to come, aimed at giving craft breweries the backing they need without forcing them to sacrifice their own goals and vision. The fund is uniquely positioned with their only interest being in making minority, non-controlling investments in breweries on the rise. It will enable faster growth for breweries trending upward without forcing them to make a choice between growth and innovation. Koch said it perfectly in his announcement about the new company:

While he could have been a little more discrete in his disdain for the market trend of big breweries buying the little guys, I highly support what he’s doing. If your business was growing faster than you could support and AB-InBev floated you a deal, it would be worth at least considering. You’re already successful, why sacrifice a good thing to stay a craft brewery and put your whole company at risk? Now there’s another option. One that can help you fund growth but guarantees you remain in control. You might not get a tremendous ad campaign out of it, but the control and goodwill earned could make up for that. This is especially true now, in a time when consumers are becoming better informed about the many goings on in the industry.

Cheers Greg! Stone’s beer is killer and I love what you’re doing to guide the industry forward.

Images and quotes courtesy of The Washington Beer Blog, the Escondido Grapevine, The Brewers Association ,Visit California and USA Today