Everyone is Trying to Catch Them All!

Pokemon Go has been everywhere since its release. It’s unclear how it will continue on as a mobile app, but its release has been meteoric despite many technical issues in the first few days. I’ll be honest, it’s not what I hoped for. It feels more like a generic AR app than a true Pokemon game, but the skin that’s on it seems like it’s enough. I’ve had some fun with it, but I may have put it down by now if not for its true killer feature.

Pokemon is an almost universal concept within people my age. Not everyone loves it, but everyone knows about the dream of catching them all. That’s been a huge key to its success so far, it evokes just enough nostalgia for just about everyone I see to be at least a little interested in talking about it, even if they have no other interest in video games. That’s the best part of this app, in a world where stimulation and media are everywhere and no one thing can catch everyones attention, Pokemon is captivating an entire generation.

With that dominant amount of mind share, Pokemon Go has done something few apps have managed. It has transcended our digital lives into our actual social ones. One of the first things I checked for in Pokemon go was a sort of friends list, a near universal feature in the age of social media, but there was nothing to be found. That’s where the apps magic started kicking in. In a time where every app features a heavy focus on reviews and ways to share it with friends, Pokemon Go forced me to just ask people if they were playing it and what they thought. A friends list where you can see each other’s Pokemon is an obvious feature, but the app makes to meet up with friends and compare Pokemon in person.

It may encourage people to walk around with their phones out all the time as well. That’s a definite negative for me, but it also encourages you to get out and walk around more, usually with a friend or 2. Social media, twitter specifically, has been rampant with people talking about how they have sore legs for the first time in awhile due to hunting pokemon. How can that be a bad thing for a app to accomplish when so many are just focused on holding our attention above all else? I’ve already heard so many jokes about how Pokemon Go has already accomplished what Michelle Obama’s Let’s Move campaign has been attempting to do for 7 years, just get kids off their ass and outside to play. No harm in that, as long as you don’t get caught by an armed robber who set up an in-game lure to catch want to be poke-masters off guard.

New features, like trading, are already being promised by developers and Nintendo’s stock price has gone up by 25%, so it doesn’t seem like Pokemon Go will be losing its spotlight anytime soon. As the game evolves, let’s hope it maintains the real life social component that makes it so special. It’s hilarious that almost the entire staff of the brewery I work at is playing the same app, and even more amusing that its about catching imaginary pets. 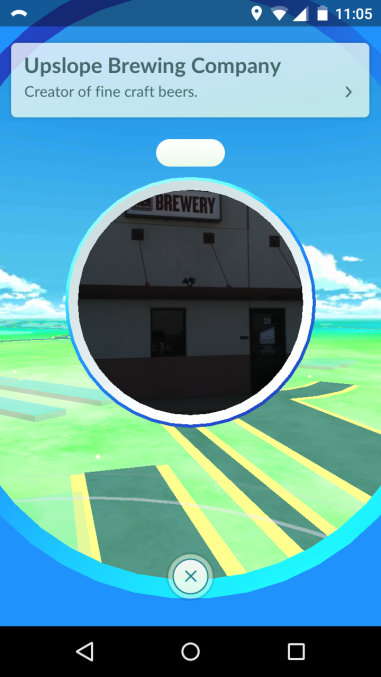 Also, if you happen to be searching around the Boulder area, Upslope’s North Boulder location on Lee Hill just happens to be a PokeStop. I caught a Gastly up there yesterday. Happy hunting everyone! Thanks for reading and let me know that you thought of the post in the comments below.